What Is Digital Signage and What Can It Do for You?

Digital signage covers a lot of bases. From images projected onto buildings to iPad-sized screens in a realtor’s window, departure signs in airports to the screen on the wall in the doctor’s office, it’s a broad descriptor.

What it’s not, by the way, is anything to do with electronic signing. That’s a red herring, caused by the fact that they sound similar; digital signage is about addressing audiences, not signing documents.

Done well, it’s more than a faster, slicker analog for physical signage: it’s a centrally-controlled network of signs that can show animated content, and change what it shows to match locations, events and audiences. It’s not about recreating a billboard on a screen. The screens might be what you see, but it’s the centralization and adaptability that give digital signage its game-changing power.

And the truth is, digital signage isn’t so much broad as it is versatile. You really can use it for a ton of different things. Before we start looking at those things in more depth, let’s quickly talk about why you should care. What’s so great about digital signage?

What is digital signage?

Signage has been around for millennia. From ancient Egypt..

..to the Song Dynasty, to the present day - signage has been a core part of human communication. The power of signs is something we really take for granted. The ability to communicate a message to someone without being present is incredibly powerful.

Before humans created systems to write and visually communicate all communication had to be done in person. The ability to warn, give directions, provide instructions is an incredible leveraging tool that has help humanity advance at a tremendous rate. Signage was literally how we communicated our way out of the stone age.

Today, we don’t necessarily have to carve signs out of stone or paint them on wooden boards. We can use computers and digital displays! While we're on the topic, let's define it:

Digital signage is a method of visual communication that exclusively uses electronic hardware to display images and messages.

What are the benefits of digital signage?

Digital signage comes with some significant advantages over traditional signage, whether your organization is trying to increase sales, encourage compliance with health or other protocols, or just make sure visitors know where all the amenities are. How effective is digital signage?

Beyond the kinds of stats you can tweet (go ahead, don’t let us stop you!) there are less-quantifiable, but still-real, benefits to digital signage. At Rise Vision, we specialize in helping education and finance organizations get the best from our digital signage solution. Customers feedback to us that the ability to push new data to every screen in their organization, to address users while they’re waiting or moving from one area to another, and to push dynamic, contextual content updates are all important to them.

What is digital signage used for?

Digital signage was first used  in places where content needed to change — in applications where traditional static signage always presented problems and required workarounds. Most of us probably encountered digital signage first in airports, where it swiftly replaced clumsy physical bulletin boards that attempted to manage  multiple, constantly-changing arrival and departure times.

Now, digital signage has replaced static signage everywhere from subway cars to realtors’ windows to roadside billboards and storefront hoardings. In many ways it allows brands to sync their digital and physical experiences in a way that wasn’t previously possible.

In stores, digital signage can capture users’ attention in ways that traditional signage can’t. One way it can do this is interactive signage. Obviously, traditional static signage can’t provide meaningful interactivity. But digital signage can offer experiences similar to those we’ve come to expect online. Users can interact with branded signage that looks, feels and functions like the company website; directions, shopping options, quizzes and find-your-fit services can all be delivered direct from signage. Interactive digital signage can even facilitate purchases directly; look around your local fast-food places and see if you can spot the self-ordering kiosks that are cutting wait times and driving up profits.

Outside retail, there are numerous other roles for interactive digital signage. Schools catering to young children can incorporate signage into games and lessons; at the opposite end of their educational careers, students can get value from interactive job boards like this one, at the University of South Alabama Mitchell College of Business:

Using mobile and digital signage together

Mobile signage can work to further stitch together digital and physical experiences. Digital signs can incorporate calls to action on mobile. The simplest way is to encourage users to engage with a hashtag on Twitter or Instagram — by answering a question, posting a photograph, or getting involved in some other way. This has the advantage of making it easier to track the efficacy of your campaigns, at least at the top of the funnel, simply by watching the hashtag’s popularity.

QR codes can also be used to link signage and mobile in innovative ways. Use them directly on signage to encourage users to download maps, apps, email coupons and calendar event invites and reminders.

Digital signage can be used as part of a proximity marketing or communication solution, either through visual codes displayed in signage or by combining signage with tagging (in badges or other wearables) or Bluetooth beacons and a smartphone app.

Live streams from events are a key feature of the online world. You can watch Mark Zuckerburg testify, see footage from NASA probes or catch highlights from sports events worldwide, as well as dip into the work of millions of content creators who know the value of a live event in bringing eyeballs and attention to their product. 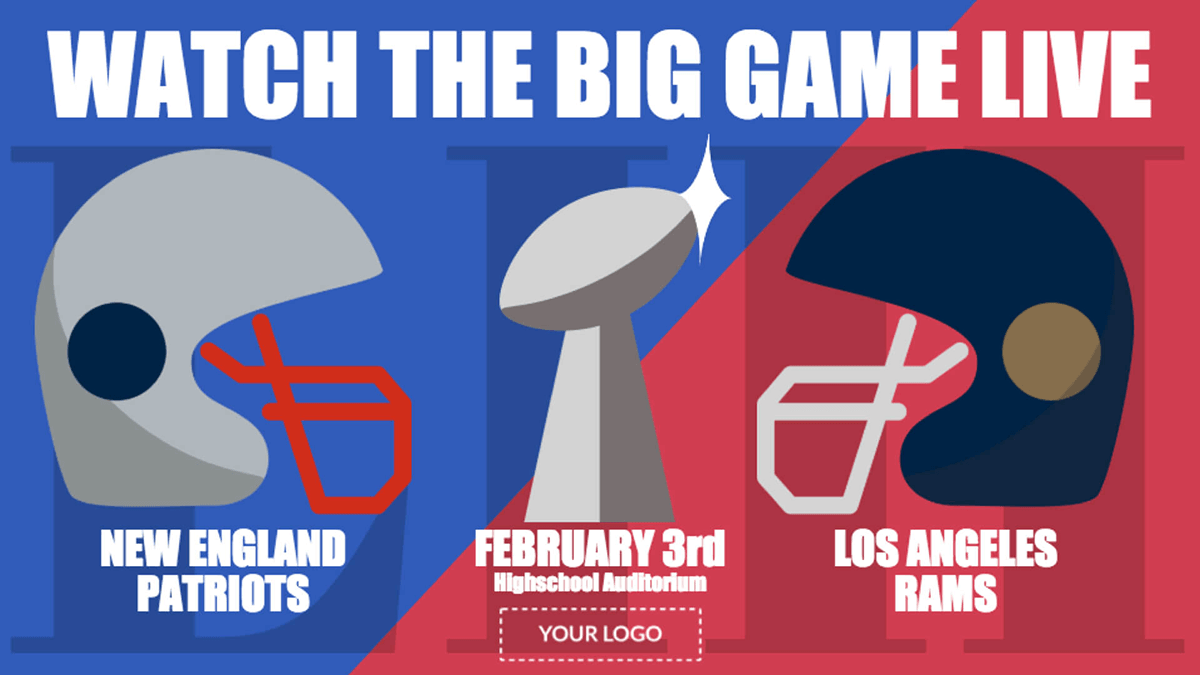 While Congressional hearings might not be the look you’re going for, there’s a ton of live streaming content out there that likely is appropriate for your audience and goals. Educational institutions can stream distant sports matches and other competitive events to the home crowd; businesses can show relevant conferences and talks, especially where staff are involved.

What’s crucial about live events as a part of the digital signage equation is that they bring immediacy, providing real value to viewers and pulling eyeballs.

Businesses can utilize digital signage inside and outside the organization. Externally its functions are clear — analogous to traditional signage but far more effective. Internally, digital signage can be used to alert staff to messages or developments that the entire organization needs to know about, serving as a rapid communication conduit when public announcements must be made as well as displaying reminders of desirable actions.

In schools, digital signage can serve similar functions to internal business use cases, acting as a communication channel for important messaging. At different times throughout the school day and year, it can also be used for guiding staff, students, visitors and parents through events or to specific locations as well as for reinforcing positive messaging.

National Presbyterian School in Washington DC has implemented digital signage throughout the school, using it as a tool to display campus updates, lunch menus, maps and school calendars as well as to display photos. 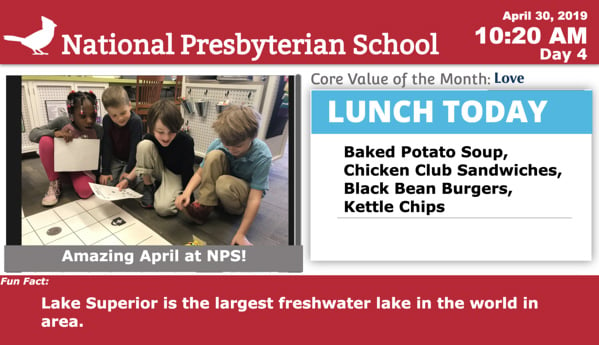 Using Rise Vision and photo CMS Vidigami together lets National Presbyterian’s two-person digital signage team — each of whom has many other roles — create slideshows that showcase the best of their school and reinforce their values, as well as letting students know what’s for lunch.

Healthcare providers can benefit from digital signage by using it as a tool for communication in a similar way to schools, as well as to encourage donations from visitors and patrons. Lobby signage can act to engage visitors as well as to direct them and to help them deal with the discomfort of waiting for appointments, while digital directories and maps help people find their way around the facility and get the help they need.

How does digital signage work?

You can’t see it on the larger picture, but there’s a menu bar up at the top there that looks like this:

Using that, you can manage your whole Rise Vision account and all your presentations from a single dashboard, so you’re always in control.

You can configure graphics, videos, text, and set timing, insert interactive content, live streams or video hosted elsewhere. It’s browser-based, and the result can be thought of as a website that’s shown from a lot of monitors at once.

Rise Vision uses templates to get users started quickly and deliver the value of what we do without having to get too into the weeds on detail, but nearly everything about what shows up on those monitors can be changed. If you want to you can build your signage content from scratch yourself.

There are templates for events: 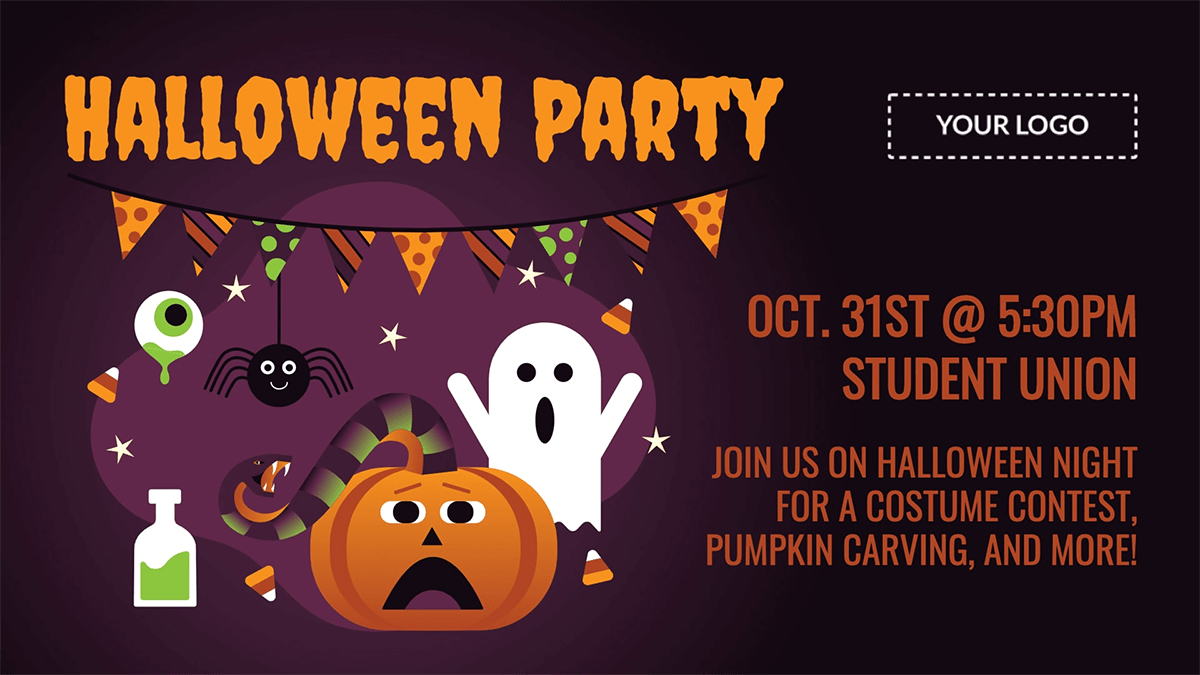 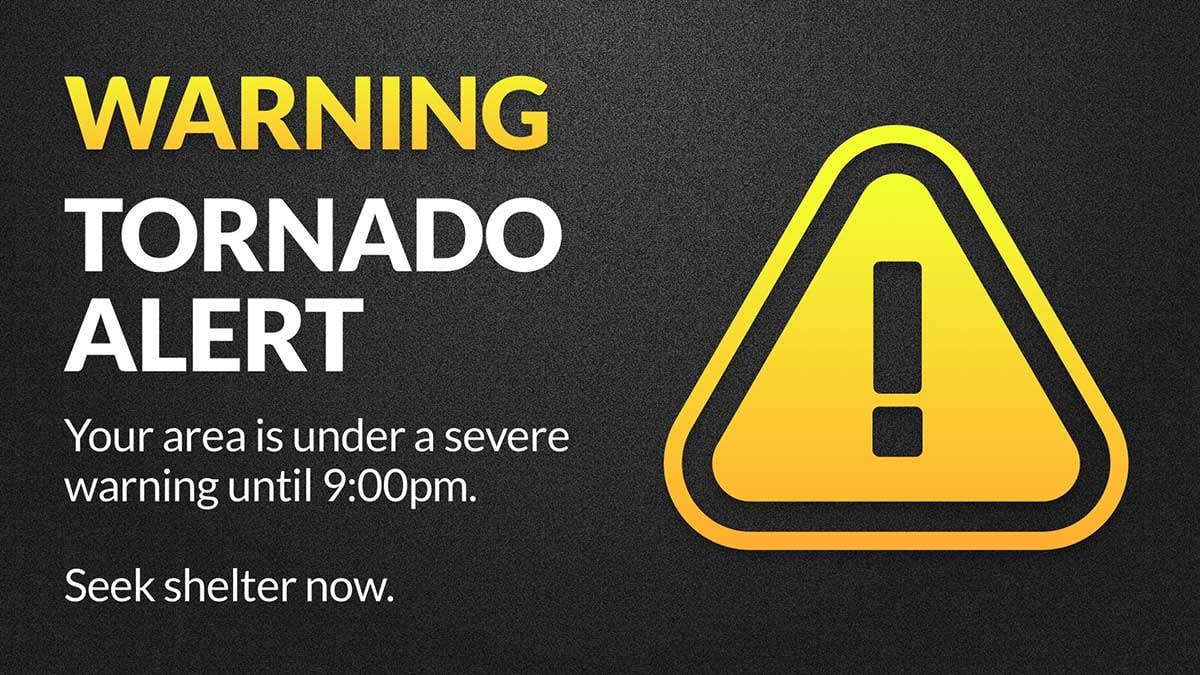 ...and for world currencies, among many others. 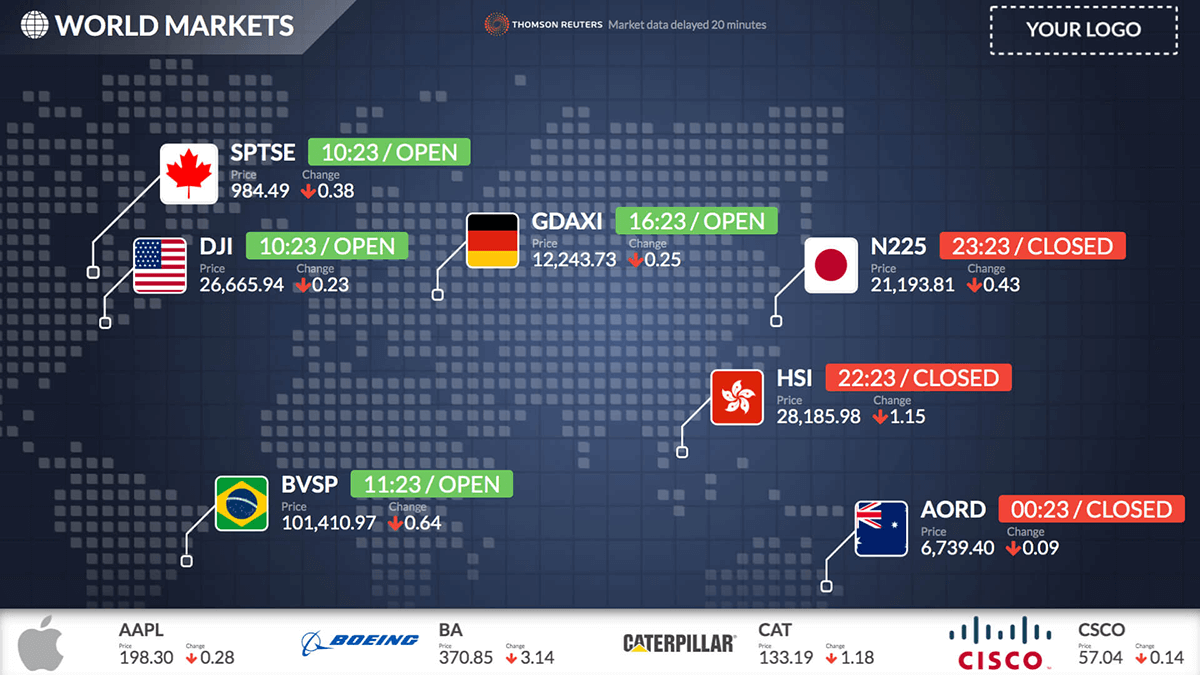 Rise Vision signage content is built in three stages. First, you’ll create your presentation — whether direct from a template, from scratch, or by adapting a template to suit your needs.

Next, you’ll add a display. This is an infrastructure step; you’ll only have to add each display once. Once it’s in the system, you can then add it to schedules to have content shown on it.

Which brings us to schedules. Schedules are how you decide which content will be shown on which displays and when. You can create variations on the same display and show them in different locations, or show completely different content depending on where the displays are located. For instance in schools, it’s common to want to show different content in corridors, the lobby, and the cafeteria. It’s also common for schools to have an audience of school students during the day and extracurricular or adult class attendees after school hours; scheduling can let you address both groups of audiences, easily and centrally.

Once you’ve selected a player, built presentations and scheduled them, you’re good to go!

Digital signage is already everywhere. It’s increasingly-pervasive as more organizations discover its unique benefits. It can be relatively simple to set up a digital signage system that delivers amazing results, delivering the right message to the right audience at the right time in a way no other medium can.

Why Fire Sticks Should Be Used for School Digital Signage