At the core of a digital signage system is the media player. It’s the computer that broadcasts your digital signage campaign to your displays. As a general rule, pair one media player with each display or sign. New options appear all the time, but here’s an intro to the topic and a brief guide to the best choices available now.

Get started with digital signage software with Rise Vision! 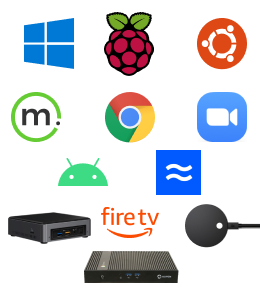 What is a digital signage media player?

By removing non-essential components, ports, and bulky cases, digital signage media player manufacturers were able to provide a compact, yet powerful solution for any organization that needed to implement a digital signage system in any type of setting.

How do you choose a good digital signage media player?

Choosing the right media player is the most critical step in the process of building your digital signage system. To help you make the right choice for your organization, we've listed some of the most popular and effective operating systems and models, together with their benefits. 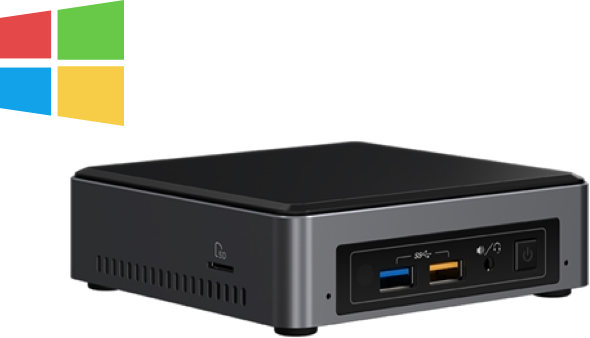 Windows-based digital signage players have the longest track record in the space. They can handle any digital signage application, they’re familiar to IT technicians, and they come with robust support from Microsoft. Windows digital signage players are an industry go-to for a variety of installations that includes shopping mall kiosks and multiple-display video walls. At Rise Vision, we typically recommend them for multi-screen applications or for organizations that already run their internal IT systems on Windows. 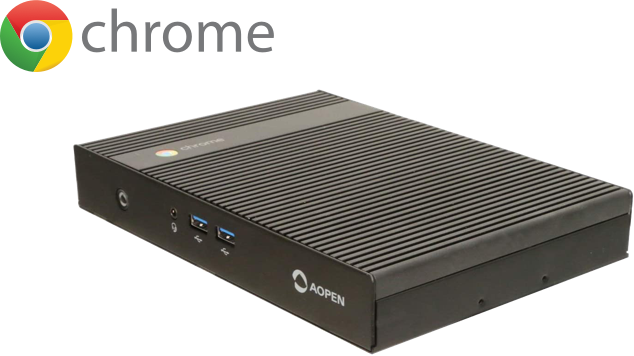 Chrome OS is a relative newcomer, and digital signage media players based on it have been available only for a few years. Recommended to a growing user base by affordable prices and compact design, Chrome OS players like Chromebits and Chromeboxes can be a great choice for small signage implementations — and can increasingly hold their own against established industry favorites. They’re effective, versatile, and secure. Note that you’ll need a Chrome device management license to use a Chrome device for digital signage.

Linux is the basis for the Chrome, Android, and Raspberry Pi Raspbian operating systems. It’s open-source, which reduces costs without compromising security, and many digital signage software packages are Linux-compatible. Linux is an adaptable OS, and choosing it for your digital signage means you’re not tied down to one company’s operating system or domain.

The Raspberry Pi is a deliberately minimal computer, conceived as a hobbyist’s testbed. However, its adaptability, reliability and small size make it an ideal media player paired with the Raspbian Linux operating system. They’re a popular choice on cost grounds as well as finding favor with technology-oriented organizations. Many organizations are getting more out of their investment in wireless presentation systems and meeting room technology by using the devices as digital signage media players when they are not in use. This helps you make the most out of idle displays and gets your message in front of more people more frequently.

With an emphasis on reliability and cross-platform support, Airtame’s small, yet powerful dongle media players are highly adaptable and offer enterprise-level security. They’re compatible with a wide variety of operating systems, and switching from streaming to signage is particularly quick and easy, making them a good choice for multi-use screens. Rise Vision integrates with the Airtame platform to display important messaging, make full use of Rise Vision’s ever-growing template library, and unify digital signage across the organization. Learn how to use Rise Vision with Airtame here.

Designed as a digital meeting space that augments Zoom’s core videoconference offering, Zoom Rooms enable HD video collaboration in real time between in-person and remote participants. The product comes with features designed to improve the experience for remote attendees, but can also be used for digital signage. Learn how to use Rise Vision with Zoom Rooms here.

Mersive’s Solstice is an excellent multi-user tool that lets groups of people cast to a single screen, or one user cast to several screens. It’s widely used in the business world for meetings and presentations, and can also be used as a digital signage display system. Learn how to easily use Rise Vision with a Mersive Solstice here.

Screenbeam allows mirroring and casting without wifi or mobile data usage, via a range of hardware devices. It’s appless, with functionality built directly into devices rather than software, but does require another device to manage content. Popular in education, Screenbeam works well with Rise Vision. Learn how to use Rise Vision with ScreenBeam here.

Interactive Flat Panel Displays, or IFPDs, are displays designed for classrooms and collaborative spaces. They’re found in education spaces with increasing frequency, with touchscreens and digital whiteboards being used in schools more and more. IFPDs are large-scale touchscreens the size of conventional digital signage displays, usually with high-quality displays, built-in software and connectivity. They’re all compatible with Rise Vision, which can be installed on any of the devices we’ll talk about here using Mobile Device Management (MDM).

Clear Touch offers a range of Interactive Flat-Panel Displays (IFPDs) designed for direct interaction. Often used in education, ClearTouch’s displays integrate with the company’s own specialized educational software and hardware accessories. Rise Vision can easily be used to show morning announcements and emergency alerts through ClearTouch displays. Learn how to use Rise Vision with ClearTouch here.

The Promethean ActivPanel is a smart whiteboard replacement that can display images, video and mixed media. Students and teachers can write and draw directly on it and save their work, and it can also function effectively as an in-class digital signage solution. Learn how to use Rise Vision with Promethean here.

Clevertouch delivers a variety of interactive displays for business and education, including the IMPACT Plus front-of-classroom display. Users can write and draw on the boards, as well as displaying any media, and there’s a range of add-ons to expand functionality. Clevertouch users can also use their boards as digital signs with Rise Vision, deployed via Mobile Device Management. Learn how to use Rise Vision with Clevertouch displays here.

ViewSonic offers a variety of display and signage solutions, including dedicated digital signage and interactive displays. Their ViewBoard touchscreen displays are mainly business-oriented, but find educational users too, and offer the full suite of IFPD functionality. Rise Vision can be used to display content in classrooms and hallways. Learn how to use Rise Vision with ViewSonic here.

"To drive the point home, we have had several vendors, some who charge $1,000 monthly for their cloud software, come through and look at the solution we have put together. They are universally blown away by what Rise Vision does and what we've been able to accomplish with it in such a short time."

What’s the lifespan of a digital signage media player?

What’s the typical cost of a digital signage media player?

Digital signage media players can cost anything from free to $1,500 or more. While it’s possible to assemble a working system by repurposing devices you already have, most organizations find their needs quickly outgrow such systems. In the long run, newer and more capable players are less expensive and longer-lasting as well as offering better security and performance.

Where can you stow a digital signage media player?

Depending on the application and the size of the media player, media players can be placed in the following locations:

In each of the cases listed above, the primary goal is usually to hide the media player from view. Not only is it generally more aesthetically desirable, but it also prevents people from hacking digital signage campaigns and stealing media players.

How do you get started with digital signage software?

To get started with digital signage software, you’ll need to first pick a Template from our website or from this page and then sign up for a free Rise Vision trial account.

Activate displays in your hallways, cafeteria, common areas, and more. 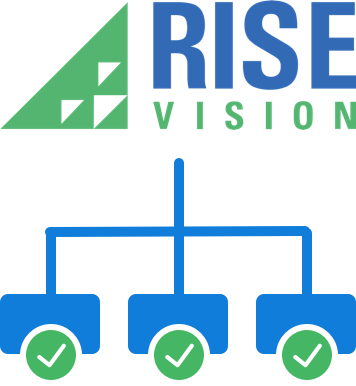 Remember to continue communicating better by subscribing to our free weekly Template recommendations and be sure to attend one of our free weekly training sessions. Also, we’re standing by if there’s any problem, feel free to contact us anytime.

Never worry about content not showing! Our uptime is 96.48% .

“We've tried different solutions for digital signage but this one's the best so far. We can plan ahead and reuse our programming. It's easy to use. It's cloud based. It's customizable. It's fast and [has] extra features to monitor devices.”