Android is a relatively new technology in the realm of digital signage. Being a mobile-first operating system, it’s easy to understand why it’s quickly becoming a popular choice for schools and organizations as their digital signage technology of choice. 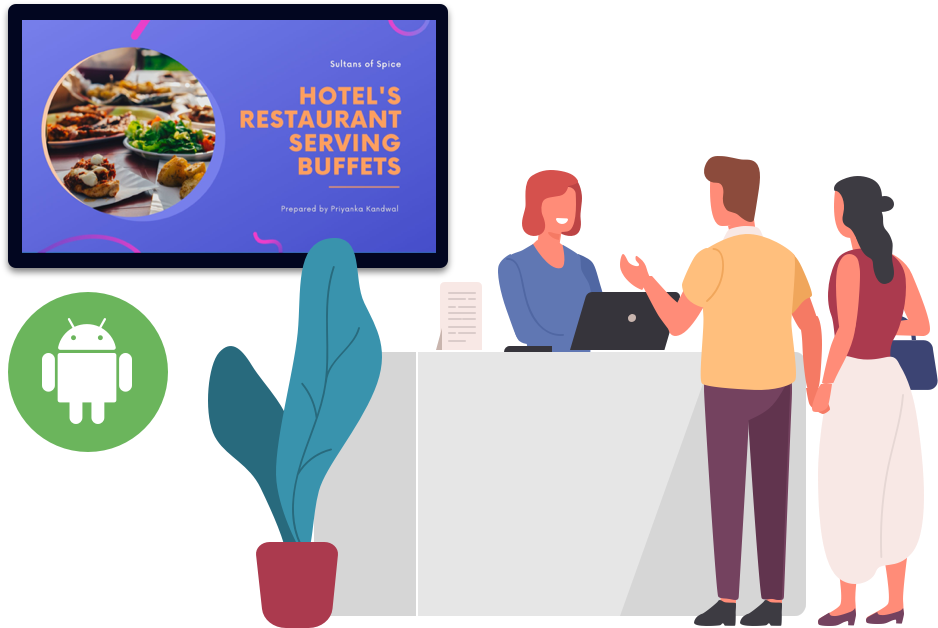 How will Rise Vision support your Android digital signage needs?

Let’s go over some of the benefits Android-powered digital signage has to offer. 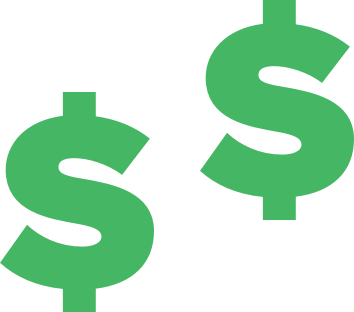 Cost is a key reason why Android digital signage is becoming a popular choice. The Android operating system is free and open source which reduces overall licensing costs. 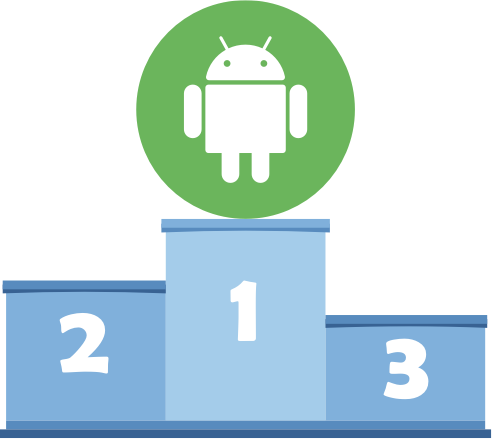 Due to the intense competition between iOS and Android, both mobile operating systems have become incredibly stable - which is vital for digital signage 24/7 uptime requirements. The added plus for Android users is that integration with Google applications is flawless and provides a seamless user experience. 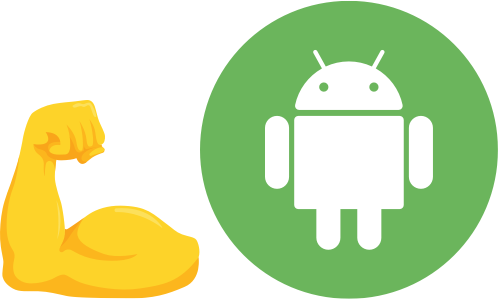 Another useful feature of Android is that it can be connected to cloud-based digital signage software by either a WiFi or cellular connection. This makes Android particularly advantageous for remote and outdoor applications.

“We have used Rise Vision for over 5 years, running on Chromeboxes and large TV monitors. It has greatly improved our communication with our students on a daily basis. It has also allowed us to provide a great first impression to our visitors, and provide them with helpful information about special events taking place in our school building.”

Before Designing An Android Digital Signage System: Ask An Expert

Android is certainly a tempting solution for digital signage. The price and flexibility alone make it extremely attractive as the core technology of choice for a new digital signage system.

Depending on the application and the operating requirements of the digital signage system, certain digital signage technologies and hardware choices may be better than others. For instance, a smart TV could be a poor choice for a digital signage system that is required to run 24/7. The average smart TV isn’t designed to operate continuously. In other scenarios (at an office front desk for example) it could be the perfect choice.

If you ever have questions on what digital signage technologies your school or organization should choose, please contact us and we’ll be happy to guide you or purchase our recommended Android media player. 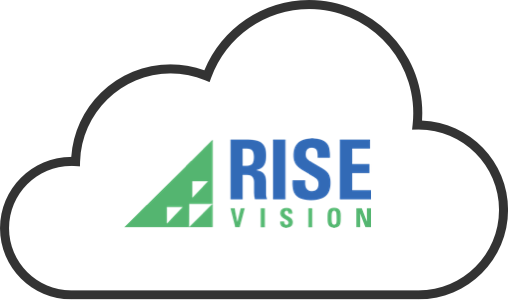 Rise Vision is cloud-based software that provides a huge advantage for any organization that is using digital signage. Gone are the days of having to install and update software, where IT or staff are required to be physically present at each device.

Rise Vision can automatically install software updates to any device in the world as long as that device is connected to the Internet. Additionally, all content and scheduling can be done remotely from any computer in the world simply by logging into risevision.com. No desktop software required!

As well as working with Android, Rise Vision can work with Linux, Windows, Raspberry Pi, and Chrome operating systems. If your school or organization ever needs to switch to another technology, Rise Vision can make the transition seamlessly.

After working with thousands of customers over the past three decades, we’ve learned that traditional digital signage can be very time-consuming. Some of our customers were spending up to 16 hours a week creating content and managing their digital signage campaigns.
One way we’ve dropped this workload down from hours to minutes is by creating a library of easy-to-use templates. Whether you need a calendar of upcoming events or a video feed, using Rise Vision templates, you can quickly style, schedule, and activate hundreds of useful digital signage presentations - for any required functionality you can dream up!
Here are a few templates that our customers have found to be very useful: 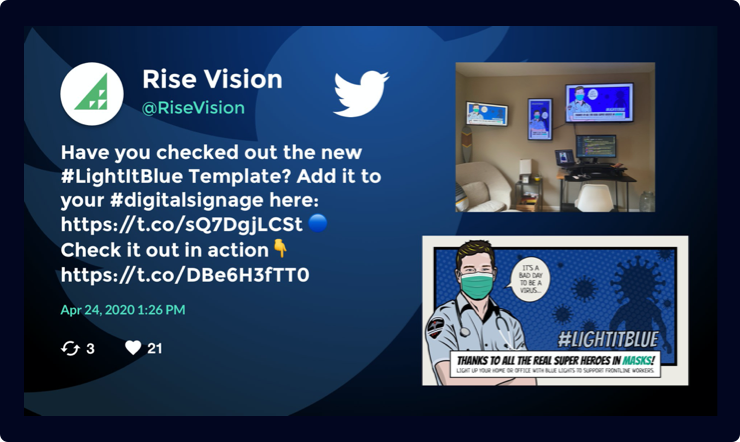 Get started with this Twitter digital signage template here.

Keeping your audience informed both online and offline is a cinch with our Full-Screen Twitter template. This template will sync with your school or organization’s Twitter account to display real-time tweets. 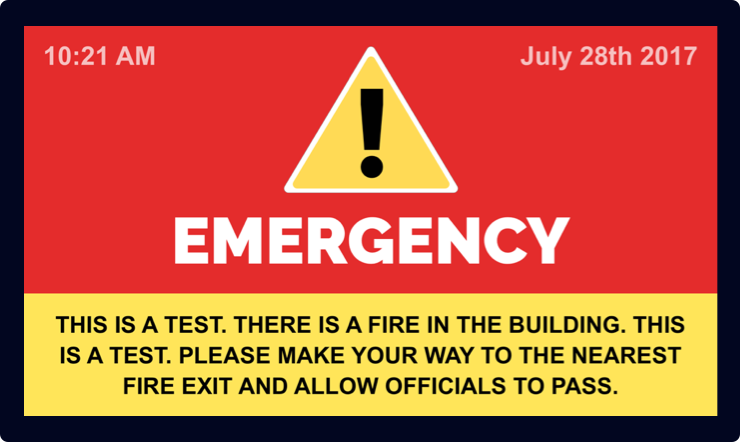 Digital signage can be used to create high-contrast emergency notifications.

All Rise Vision accounts can integrate with emergency notification and CAP alert software. This allows schools and businesses to broadcast emergency messages at a moment’s notice. 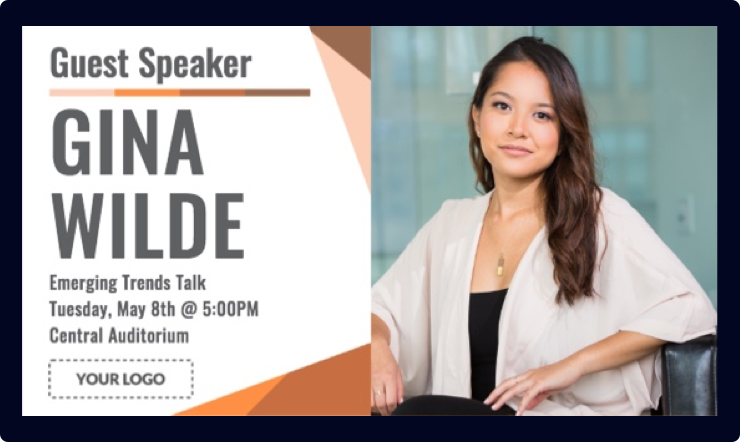 Get started with this guest speaker digital signage template here.

This template is perfect for any school, university, or venue that has a regular speaker rotation. Combine this messaging with our social media templates to get the maximum reach out of your guest speaker campaigns.

An events calendar is a great way to keep everyone informed.

A must-have for any school, business, or organization is up-coming events and calendar signage. This easy to implement solution keeps everyone informed about the day’s events. 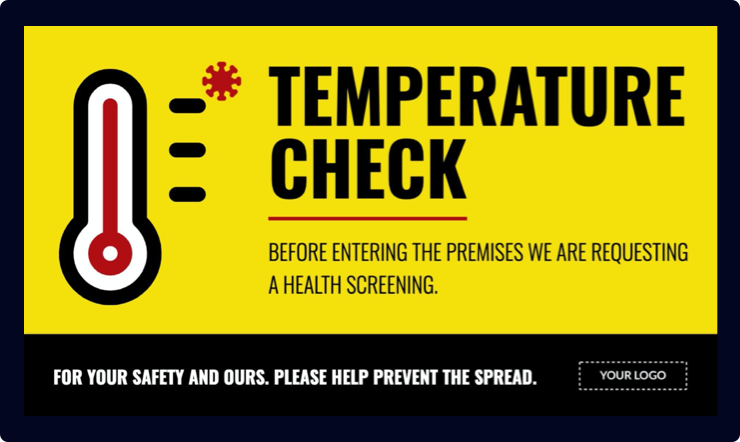 Since Rise Vision is in thousands of buildings across the world, we’ve made it our mission this year to provide our customers with highly effective COVID-related signage to help protect employees and students.

How do you get started with android digital signage?

To get started with Rise Vision digital signage software,  you’ll need to first pick a template from our website or from this page and then sign up for a free Rise Vision trial account. 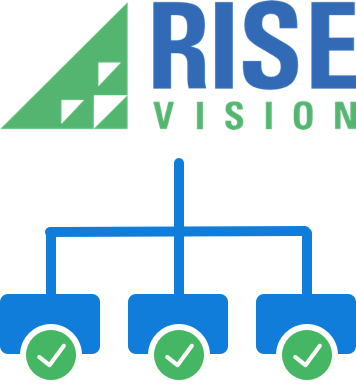 Never worry about content not showing! Our uptime is 97.27% .

“Rise Vision's software allows us to easily promote important events around campus to a wide audience. The interface is very user friendly and those in charge of the screens are able to update and manage the content shared very easily.”