How Schools Can Improve Student Engagement with Technology

Improving student engagement, attendance, and achievement are key concerns for educators, the more so since they’re interlocked, tending to flow from each other. Traditional methods typically involve a fragmented approach. They often focus on individual issues and boil down to ‘more of the same’: underperforming students come into school for more of the classes they’re already failing, truant officers chase students who evade their teachers. The results are lackluster too.

What if there were a more effective approach, leveraging the best (and often, simplest) of technology to empower students to build their own effective, engaged and successful school communities?

Get Students Involved in Creating a Student-run Newscast

Students often jump at the chance to create their own content, which can then be broadcast across the school on digital signage. Show formats often start out as fairly formulaic morning shows, newscasts, or daily announcements — things that schools would want to broadcast anyway.

Shows like this give students the opportunity to learn skills including media literacy and communication, in a way that’s less abstract than classroom learning. Students learning about how to structure essays or written responses encounter the same challenges when they prepare broadcasts. There are differences, though, including live deadlines and an audience. Intent is different too. There’s a crucial difference in attitude and performance arising from a focus on using, rather than demonstrating, skills.

That’s true of media literacy as well. Critical examination of media presentations in class ally perfectly with the construction of media presentations that let students see how the sausage is made. After you’ve had to make decisions about what goes on air and what doesn’t based on a range of concerns and pressures, you’re far better placed to understand why a newsroom ran one story and not another.

The structure of such shows often begins to change once students begin working on their own content. Students restructure material around their own concerns and those of the school, in response to their audiences and to their own experiences.

The process has pulled more students into creative pursuits, explains Jason. ‘Students take turns. They have very elaborate commercials and announcements that they put together that get the entire student body involved. We also have a couple of graphic design labs where they'll bring and design logos for the different clubs and groups… we have a media lab where they get to learn about newspapers and magazines and online broadcasts and things like that. So students are coming together and collaborating, and this can be taken as a class or also joined as a club.’

‘The students can engage,’ Jason goes on, and ‘the parents can get involved. As long as you give them that code to join either the course or the group, they become active with the students as well. So it brings in the whole community atmosphere.’

Allan Horton, of Garland Independent School District in Garland, Texas, concurs. ‘I would say students do 90% of all of our morning announcements,’ he says. ‘They write the script, and they're on the air, and they'll have guest faculty and things involved in it. And there are, of course, faculty members there to oversee to make sure things don't go awry.’

Recognition of student and staff achievement doesn’t have to stop at the trophy cabinet, graduation ceremony, and alumni magazine. The traditional approach tends to focus on particularly conspicuous students or achievements — the quarterback of the winning team, or the best-performing academic students. But the whole school community helps contribute to an atmosphere in which all can succeed, and some of the most important and impactful actions taken by both students and staff are relatively unshowy and risk going unnoticed.

This matters, even though people frequently act well for other reasons than the hopes of receiving praise. People need to feel valued and recognized, an important motivating factor linked to improved outcomes across the board. And school communities benefit by celebrating relatively small, achievable positive behaviors that many students can emulate.

That ties into another major goal for whole-school efforts: addressing SEL outcomes in ways that actually move the needle. It’s much easier to change school culture, or guide it in the right direction, if there’s a cohesive and involved school culture in existence to begin with.

‘Our mascot is the Falcon,’ says Scott Boyer, systems coordinator for Cornwall-Lebanon Schools. ‘So a lot of the things that run around our district have to do with nests and wings, and things bird-related. So one of our big student engagements that we use is the Wings of Praise, which is a way to recognize students that don’t necessarily stand out in the crowd. They might be good academically, they might be good athletically, but they just do good things generally.’

If any student or teacher sees a student performing a positive action, no matter how small, they can take it to the principal. Once the principal signs off on it, it’s entered into a prize draw. The winner receives a prize, typically a gift certificate, and their photo is taken against the Wings of Praise wall and shown throughout the school on its Rise Vision screens: 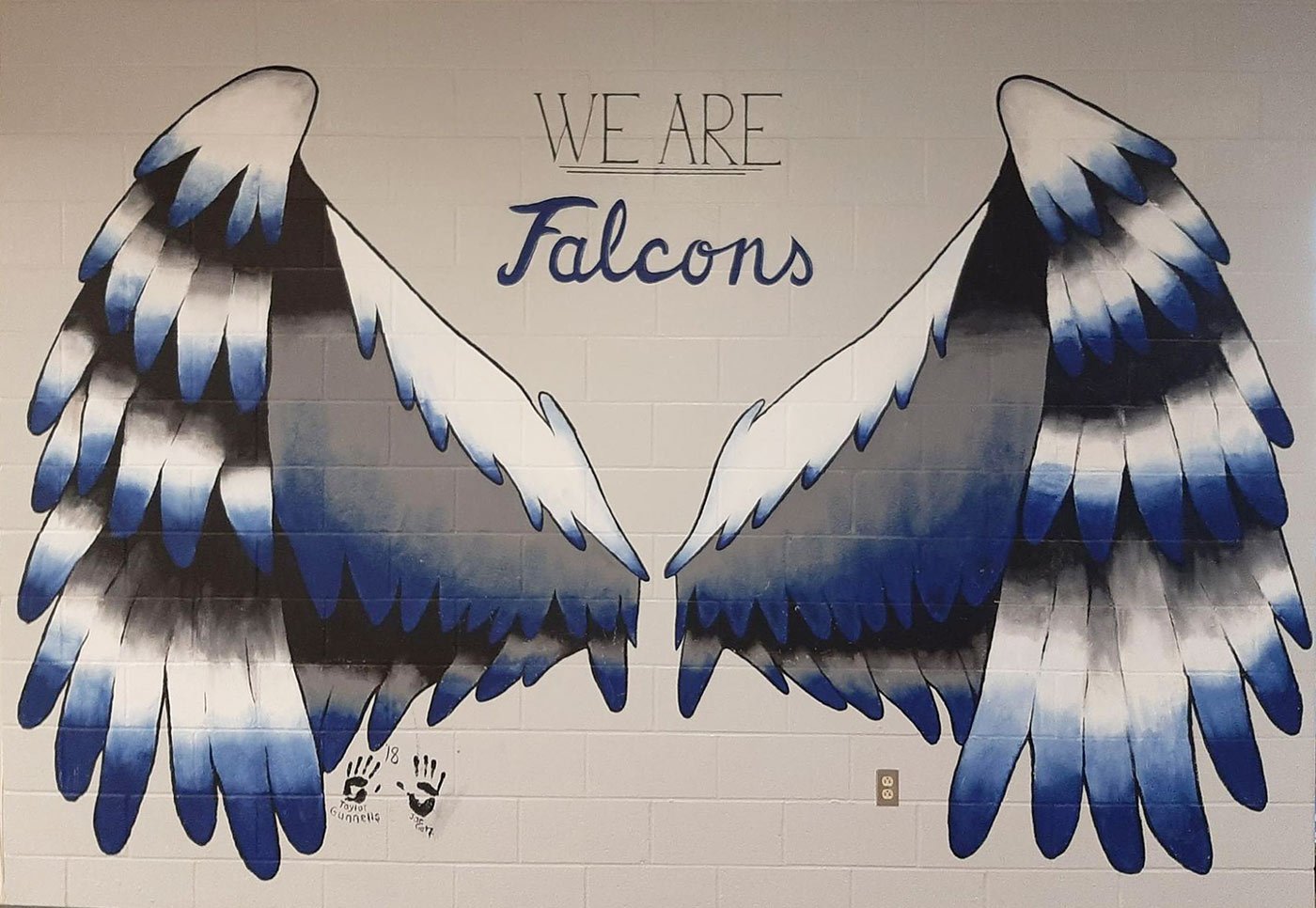 ‘Those kinds of kids, that kind of get overlooked at times, we try to push them out to the forefront,’ Scott explains.

Schools can build similar structures themselves, using their digital signage solution to address SEL issues like bullying, interpersonal conflict and emotional regulation; this isn’t separate from recognizing student contributions to the school community, but bound up with it. SEL training, according to CASEL’s Joseph A Durlak and Joseph L Mahoney, ‘suggests that SEL programs may affect central executive cognitive functions, such as inhibitory control, planning, and set-shifting that are the result of building greater cognitive-affect regulation in prefrontal areas of the cortex.’

Achieving this takes more than digital signage alone but it can be a vital part of the toolkit. Creating it allows students the opportunity to work creatively together, reflect on and engage with a wider community; when displayed it can have a priming and nudging effect on whole-school attitudes and behaviors.

In American schools, chronic absenteeism is defined as missing 10% or more of a school year. About one American student in six misses enough school to qualify, with those numbers weighted toward students of color, students living in poverty and students with chronic health conditions and disabilities. A single year of chronic absenteeism can be a better indicator of high school graduation than test scores.

School attendance is a key predictor of student outcomes, and it’s remarkably accurate even for outcomes later in life. Partly that’s a measure of correlation rather than causation — students with unstable and traumatic home lives that devalue education are more likely to continue those patterns into adulthood, and poor attendance is a part of the pattern.

However, there is certainly causation at work here. Poor school attendance reduces the ability of schools, teachers and others to intervene in the lives of students with damaged, and damaging, families. The more a student is in school, the more the school can do for them. Therefore, encouraging student attendance is a key target for many schools.

The question is how. Exhortation, encouragement and the threat of the truant officer are somewhat effective for some students, but they don’t effect the whole-school transformation to a positive, engaged atmosphere that drives individual students to actively want to come to school.

What does, though, is increased engagement and opportunity for creativity. Consider Cornwall-Lebanon’s experience with combating falling grades. The traditional approach, involving compulsory after-school study halls, wasn’t too effective.

‘And we're seeing the numbers for our study halls actually go down because students have been helping each other out.’

National Board-certified media specialist Joyanne Herdman, of Lithia Springs Elementary School, says, ‘the most significant thing that we've seen is the students' confidence level… those kids feel like superstars. We had two students who had to be retained, and then they repeated that grade. But by being a participant in the right vision for our morning show, their confidence level has been maintained, and it's helped boost them and kind of given that personal drive to keep striving for success.’

Classroom engagement depends on multiple factors, chiefly those in control of teachers and departmental heads. Issues like curriculum contents can make a difference, but education is the result of a relationship between student and teacher. This positive relationship leads to actions on both sides that gradually cement and improve the relationship — a self-stoking cycle. The relationship between classroom engagement and scholastic achievement is extremely robust and well-researched, and ‘the extent to which students’ interests are incorporated is significantly related to their academic achievement.’

However, that’s not to say that there are no technological interventions that can lead to improved outcomes for students. Anything that increases classroom engagement can help improve student outcomes, both in that class and generally.

Dr. Monica Myers of Jackson Local School, Stark County, Ohio, says her school has used its Schoology LMS to ‘create... our own course for teachers to access as independent study or group study. So it is a really big focus for us to engage and set high expectations, make sure students are involved, teaching life skills, social behaviors, all of those things that go around being resilient. And through that study, you can't help but have student engagement. Everything is focused on the child.’

Technology doesn’t automatically improve student engagement, in any school. But it does create space for new possibilities, letting schools engage students in ways that were not even considered before. Engaged students have better attendance and the improved scholastic and life outcomes that flow from being present in both senses. In addition, classroom technology gives schools the chance to build better relationships between students and teachers, and to pursue better SEL teaching and practice, which also has a significant bearing on every other outcome.

Read The Next Post:
The Benefits of Digital Signage for Marketing Communications