Digital signage has always been compelling to Michael, and he first got into it almost ten years ago. Michael started by researching paid and free solutions for George School. Unfortunately, Michael's research found that most paid digital signage solutions were too expensive, and the free solutions were too complicated to set up and manage. Then, in 2014 a peer-recommended Rise Vision to Michael. The timing was perfect as George School had a new athletic center that needed signage. Michael tried out Rise Vision and was impressed by the low cost and ease of use. Michael got funding and started the process to get their digital signage up and running.

George School uses a location-driven communication strategy. The people who run each location manage the content for the digital signs in their area. There are now nine people logging into Rise Vision and making changes to the content. The signage shows 70% location-specific content and 30% content that is relevant to the whole school. This ratio changes in common areas, which display information relevant to everyone.

George School sources content from a variety of places:

Some examples of content that George School shows are: 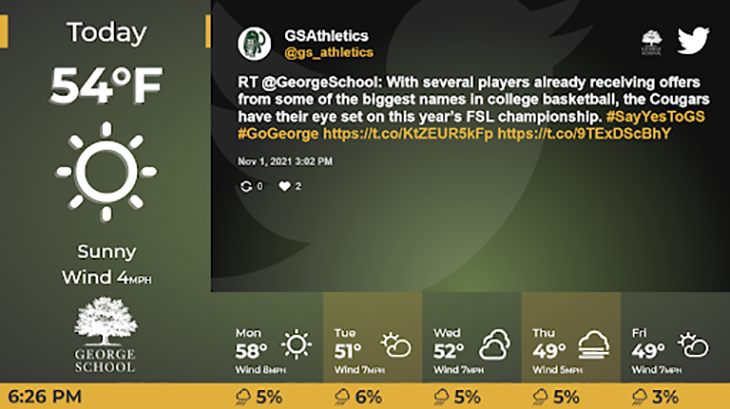 George School's approach to digital signage is practical. They get many people involved in managing content. They reuse content from several sources. And they avoid trying to share everything with everyone and instead keep their messages targeted.

Goals For The Future

These are still early days for George School, as many of the displays went live in the 2021-22 school year. Michael has been the number one proponent for implementing Rise Vision digital signage at George School. He adds Rise Vision tech support has been excellent. "When I hit a wall, they have been quick to send me short 30 second videos of exactly what I need to do, and I can keep rolling." Overall it has been a soft launch thus far, but committees are taking notice. Michael has watched people observing the signs commenting, "Hey, that's cool," and he is excited for more feedback to come.

George School is modernizing and upgrading technology throughout the school. For example, George School recently purchased the Unlimited License, which provides them with unlimited displays. So Michael is testing Rise Vision on Airtame devices for use in classrooms and other locations in the school. The expanded digital signage will make it easier for George School to keep faculty and students informed.

As Michael says, "In the past, in the student union area, they had bulletin boards for posters, which had stopped because people got out of the mindset that this is what we need to do, yet that function is still practical, and the digital sign replaces it well. With digital signage, you can make the modifications from anywhere without printing flyers and walking around to put them up in places."

Interested in seeing how other schools have used Rise Vision to inspire students? Here are a few more stories to check out: