Founded in 1919, Sarah Scott Middle school is located in Terre Haute, IN with a student population around 400, serving grades 6-8. Their motto is:

Sarah Scott: Where hope is inspired, talent is trained and potential is developed!
Source

Tony Smodilla is the Media Specialist for Sarah Scott Middle School whose day-to-day activities extend far beyond what you’d typically expect of this type of role. Smodilla’s responsibilities are to alleviate the overflow tasks of the district’s dedicated IT team, and to tend to library and student needs. But over Smodilla’s 20-year career with Sarah Scott Middle School, his passion and interest in media and teaching have carved out a unique niche for hands-on media and broadcasting experience for middle schoolers in Terre Haute.

Read on to learn how Smodilla took Sarah Scott’s school media department from concept to a full-blown, state of the art program with a custom TV Studio, CNN affiliation, and a “Best School Newscast in the Country” title awarded by Channel 1 News.

Smodilla has been involved in managing Sarah Scott’s digital signage for many years, and when the time came to upgrade to a paid Rise Vision account, he was prepared to get creative with sourcing funds. Smodilla tapped into a longstanding business relationship with local sporting goods dealer Rick Bagnoche of Bagnoche Sports and struck a deal. “Over the years Bagnoche Sports has made all of our academic t-shirts, athletic team t-shirts, shirts for faculty, sports teams uniforms, you name it,” explains Smodilla. So he decided to call up Bagnoche sports and offer to promote their business on their digital signage in exchange for sponsoring Sarah Scott’s Rise Vision subscription. Bagnoche agreed on the spot, and the rest is history! 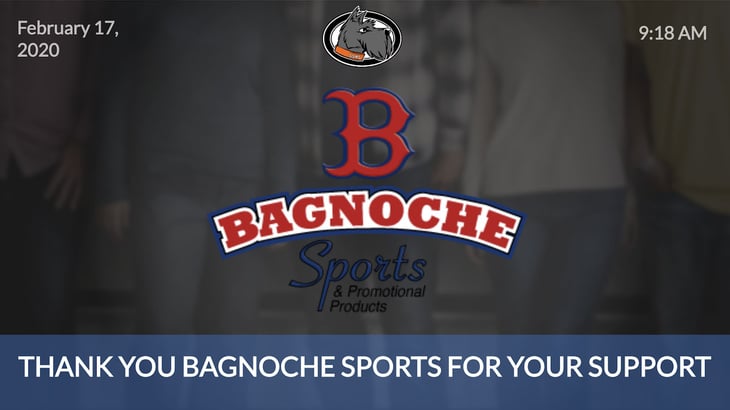 With their new subscription in place, Smodilla was eager to start taking advantage of the premium features, like templates. Originally, Sarah Scott’s digital signage consisted of a single, dynamic dashboard that would rotate in new information, but with access to the template gallery, Smodilla tells us, “I was like a kid in a candy store--I’m blowing up the templates like crazy!”

While it took some time to get everything set up and in place on the Rise Vision app, Smodilla explained that he only spends about an hour or two per week keeping everything up to date now. “I like to get in and play around with [Rise Vision] every day. But I also like the [templates] I don’t have to touch”, Smodilla tells us, and these templates that he’s referring to are automatically updating templates.

Some of the automatically updating templates that have made their way into the regular Sarah Scott rotation include the “Celebrate Diversity Calendar”, “STEM Facts", and “On This Day in History”. And with the addition of the new content, Smodilla notes, “The students stop and watch [the displays] a lot more.”

From digital signage to the web

Sarah Scott Middle School has nine digital displays that they use to communicate with their community, notify people of emergencies, and create a strong school culture. Smodilla shares events, holidays, sports highlights, and more. The displays have been a major help in keeping everyone informed.

To help spread their message further and save time Sarah Scott has started sharing their Rise Vision schedules on the web and with parents. The new feature has given Smodilla the ability to share all of the amazing digital signage content on the school website, in social media, over email, and more. Smodilla explains “instead of typing the same information in different places I can update one place, it’s a lot easier.” Smodilla estimates the new feature has cut the time he spends updating their website and getting communications out to parents in half. 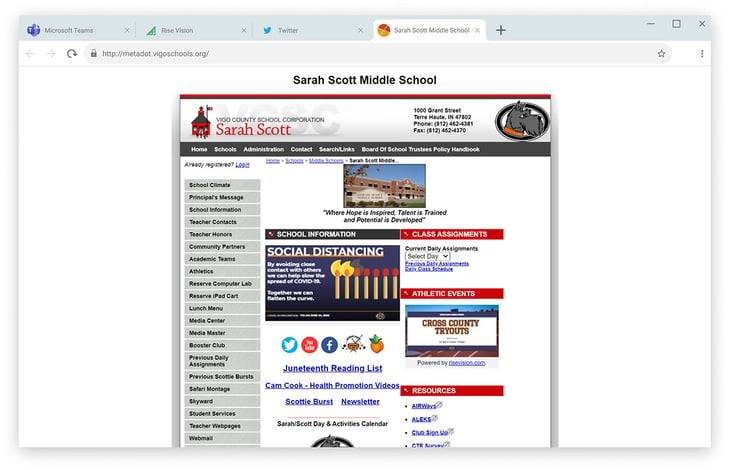 Using Rise Vision, on the school website, Sarah Scott Middle School shares photos from the school year, upcoming events like sports tryouts, and announcements. The animated templates on the website have made it much more engaging than just static text.

Using templates is a great way to keep communication interesting, but Smodilla isn’t just thinking inside the box when it comes to Sarah Scott’s communications. On any given day, you can walk by signs in their hallways and catch a live stream of a sporting event (with commentary from Smodilla), a school event, or a school assembly. But, if you walk by a digital sign on a Friday afternoon, you’ll be lucky enough to catch the live broadcast of the Sarah Scott school news on their in-house TV & Film Production network, WSSN!

WSSN is a product of Smodilla and retired Scottie teacher Steve Lingenfelter's imaginations that started as a makeshift production studio using the resources they had at their disposal. Then in 1999, the school moved onto a new building, and Smodilla was able to collaborate on a state of the art control room and studio built especially for TV and media broadcasting. “I drew out how I wanted the rooms to be set up, and they built it,” Smodilla told us. “Now it’s the real deal.” 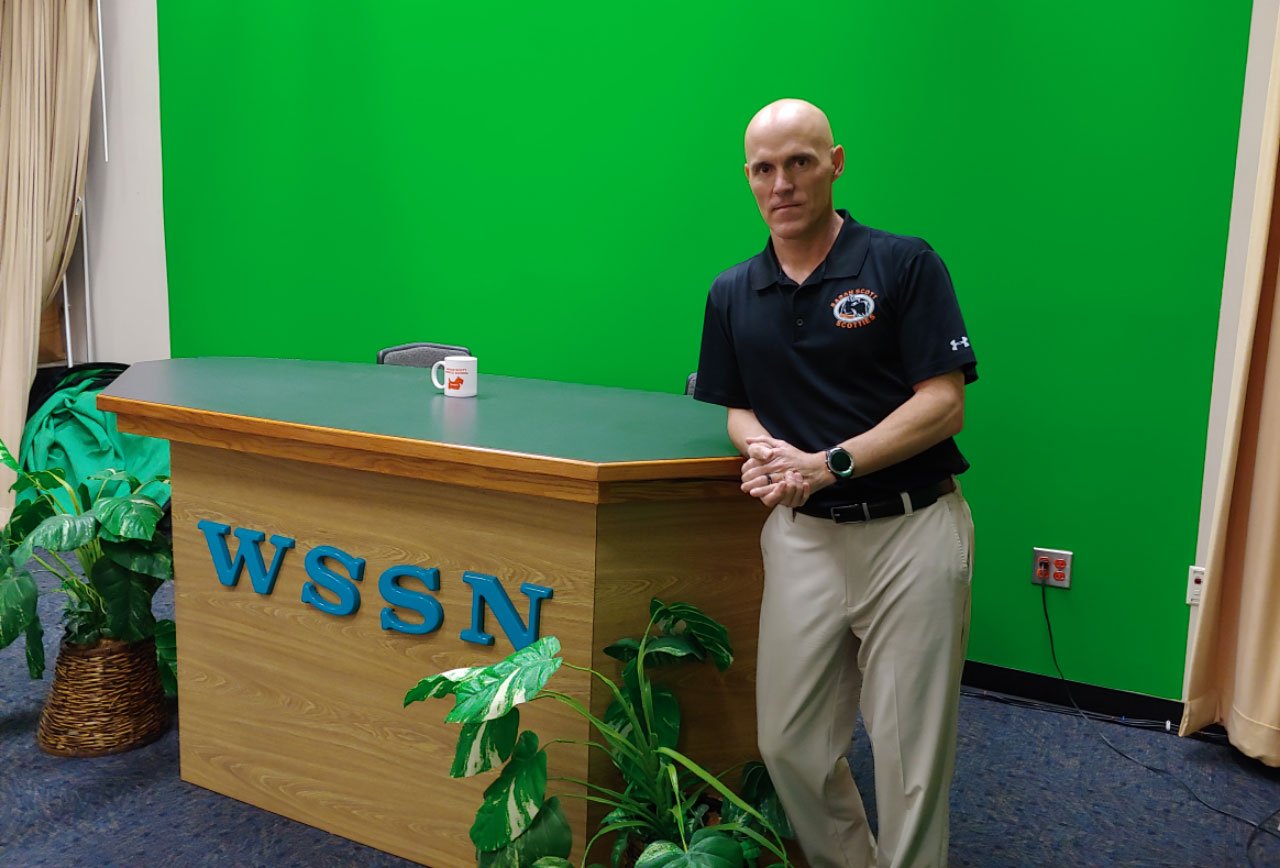 WSSN’s school news broadcast is completely student-run. Teachers and Smodilla will nominate students to be involved, and from there they compile a production team and newscasters to deliver their updates. WSSN is an official CNN affiliate, so WSSN is able to include stories sent to them by CNN in addition to school announcements, weather, and local happenings on their broadcast. Check out one of their recent newscasts:

WSSN’s news is broadcast live on Friday afternoons using YouTube’s Live feature to show WSSN’s channel “Scottie Live Stream”, then it’s paired with Rise Vision’s YouTube integration so it can take over all their digital signage when the news goes live. The newscast is then archived and shared again on Monday morning for anyone who might have missed it.

Sarah Scott’s outstanding media program provides incredible hands-on experience to students who may otherwise have never become interested in the field. A lot of their middle schoolers who participate in the WSSN program go on to take TV broadcasting at the high school level to further pursue their interest. These students, armed with real experience in a control room setting, have a big leg up on their skills and knowledge of the field.

Smodilla has done such an amazing job with the digital signage a TV station came out to do a story on it. See the report from WTHI-TV10.

We’re always inspired by the outcome when a creative mind jumps into our tool and takes full advantage of the available features. Smodilla’s use of templates to captivate and inform the student audience is top notch (they even have a sign that switches over to a concession stand menu during sporting events!). We love that he uses Rise Vision on their website and digital signage as a tool to communicate with parents as well as promote student involvement and achievement. WSSN’s news broadcast gives students something to aspire to be, whether it’s on the screen delivering the news, or part of the team that’s making it happen. Having the mentors who compiled the resources and brought their newscast to life is something really special, and we’re grateful to be a part of it!

Tony Smodilla began his pursuit of becoming a teacher at Indiana State University. After graduating, he began his teaching career at Cannelton Jr./Sr. High in Cannelton, IN. In the fall of 1993, he returned the next year to Terre Haute to begin teaching at Sarah Scott. He was the Technology Education teacher until 2000 when he moved to his current position of Media Specialist.

While at Scott, Smodilla created the WSSN News team. It was selected in 2003 by Channel 1 news as the best student news in the country. WSSN News is also the only middle school news program that is also a CNN Affiliate.

Smodilla has also coached Cross-Country, Boys' Track, and Boys' Basketball. Since becoming a Scottie, he returned to Indiana State to complete a Masters of Education in Educational Technology, along with Library Science & Audio-Visual Services.