How Large Universities Save Money with Digital Signage

About University of Toronto Mississauga

To keep all the students and staff up to date on campus events, guide them toward classes, and provide profiles of professors and research projects, the university relies on 25 digital screens in its academic buildings and library.

The NEC screen displays were initially operated by OPS computers from NEC. “The downside of these PCs has been cost,” explains Luke Barber, Senior Systems Analyst at the University of Toronto Mississauga. “Each of the PCs costs about $1,300, plus you need a license for Microsoft Windows. Then there’s the administrative time you need to put into each device – you have to configure them and do patches and updates.”

Rise Vision, creator of the free digital signage software that Barber and his colleagues use to manage their large format LED displays, suggested using Google Chromeboxes instead to power their screens. Chromeboxes update automatically with new features and security fixes, so managers of digital signage content don’t need to spend time doing updates or configuring the devices themselves.

“The Chromeboxes were 100% plug-and-play,” says Barber. “We know we’re saving time in our IT department because we no longer need to configure PCs, or worry about updating the operating system.”

This allows digital signage administrators to focus less on hardware and more on creating and deploying great, engaging digital signage content. Rise Vision’s free platform allows them to quickly accomplish this by either using its library of widgets, or building their own content with HTML. 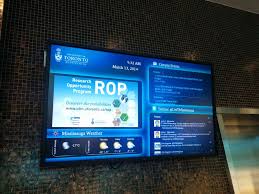 “Our experience with Rise Vision and the Chromeboxes has been great,” says Barber. “We’ve been running them for six months, and we haven’t had to touch them or do any updates. The performance is indistinguishable from the much more expensive PCs. The Chromeboxes will run the same rich content we displayed with the PCs, and complex transitions between images and video happen flawlessly.”

Since Chromeboxes cost much less than PCs, the university can stretch budgets to buy more screens. “We’re hoping to put install another 25 screens later this year, and with the Chromeboxes at a more attractive price point, it’s easier to get funding,” Barber says. “Buying four screens and Chromeboxes costs the same as what we were previously paying for three screens and PCs – so it’s like we’re now getting an extra digital signage setup for free.”

Get Your Message NoticedSIGN UP NOW

Keeping Students in the Loop: How a Tribal Compact School Uses Rise Vision to Help Connect Its Students to Their Community