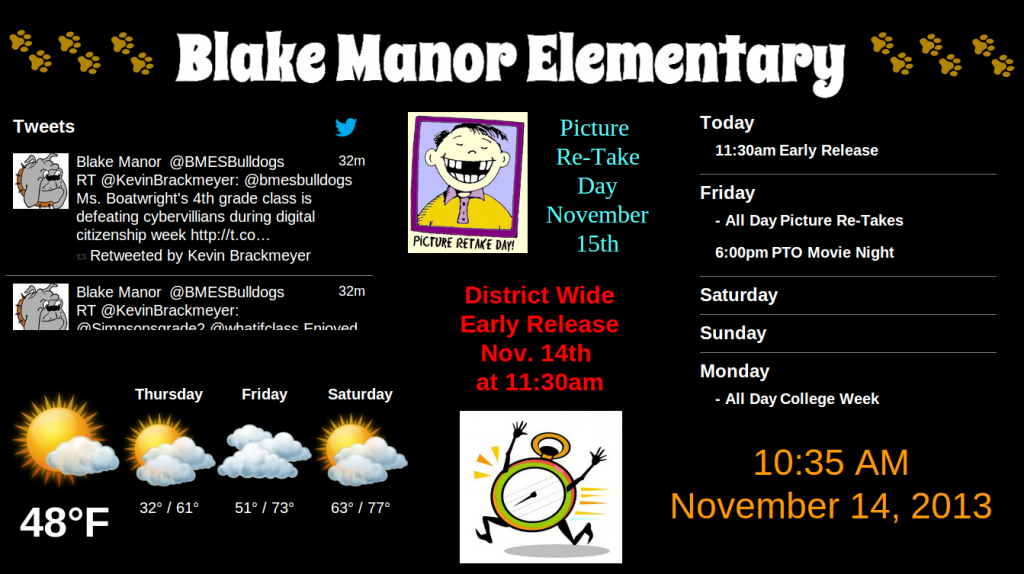 “To run the screens, we repurposed netbooks that were being retired from classrooms,” explains Wayne Fulton, assistant director of technology services for Manor ISD. “So they were already old technology when we put them to use on our screens, but since we’re always conscious of our budget, it made sense to try to reuse what we had instead of investing in new devices.”

However, the netbooks consumed a lot of power, Fulton says. “Energy use is a big cost in our district, and our superintendent is looking at all possible ways to cut down on energy consumption,” he says. In addition, the netbooks used cooling fans that were not only noisy, but also tended to fail, Fulton adds: “In some cases, when the fan died, the netbook itself would burn out and we’d have to replace it.”

Rise Vision, creator of the open-source digital signage software that Fulton and his colleagues use to manage their screen displays, advised Fulton to test Chromeboxes to operate the district’s digital signage screens. The Chromeboxes small size and streamlined operating system also make them efficient to operate. “We had no issues with installing the Chromeboxes and Rise Vision” Fulton says. “They were truly plug and play – we simply attached them to the screens, and they worked right away. Once we set them up on our network and connected to the displays, we didn’t have to touch them at all – and they seem much more stable than the netbooks.”

“We’re finding that the power consumption with Chromeboxes is much less than when we were using netbooks,” Fulton says. “They also run more quietly, since there are no fans or spinning hard drives – which means we don’t have to replace parts, or run the risk of the devices burning out.”

The power savings, and Rise Vision’s free platform, make this solution especially attractive for screen setups in school districts, Fulton says. Given the cost savings, Fulton is hoping to add more screens to other campus buildings, as budgets allow.

“Compared to other digital signage solutions on the market, Rise Vision paired with the Chromebox is much more affordable,” he says. “This is important for cash-conscious school districts that are trying to expand placements of their digital signage screens.”

Keeping Students in the Loop: How a Tribal Compact School Uses Rise Vision to Help Connect Its Students to Their Community