Celebrating student achievement can have important effects, both for the students in question and for the wider student body. It can motivate people to do better, or make them feel like they can do things they previously thought were beyond them or barred to them. It builds confidence, acknowledges effort, and helps foster a culture of inclusivity and aspiration. Celebrating the success of one student in one endeavor can bring positive benefits to the whole school.

How should schools go about this? In this post, we’ll offer three key areas where digital signage in classrooms can be used to achieve these benefits — and others. If your school already has digital signage in classrooms, some of these ideas can be used immediately; if you don’t, consider Rise Vision’s Unlimited License to support your expansion of this powerful educational aid into your school’s classrooms.

1. Student of the Month

One of the most obvious ways to celebrate student achievements is a ‘student of the month’ program, similar to the ‘employee of the month’ we’re familiar with from workplaces. They’re a great way to showcase the achievements of outstanding students. That’s why Rise Vision has a template for them in our ever-expanding template library:

They’re also much more versatile than they first appear. Once you start wondering how to implement them, all sorts of questions start to arise — questions that can be used to build more varied ‘student-of-the-month’ programs that are more inclusive and effective.

For example: what are the criteria by which we choose a student of the month? If they’re too scholastic, the title-holder will be the student with the best grades. If they’re too centered on sports, the spot will always go to the quarterback. But in reality, these awards are usually a way to reinforce school cultures. So, schools can start by identifying which aspects of their school culture they especially want to foreground, then building a scoring system that gives a chance to students who don’t necessarily already expect a trophy or a prominent part in school life.

Some ideas to consider include: 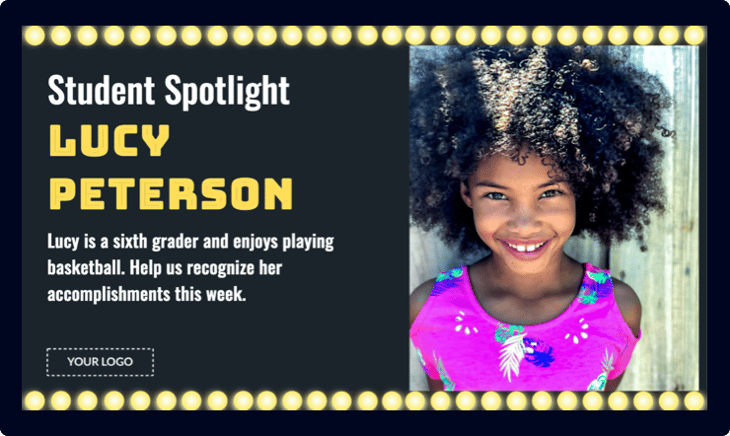 What all these ideas have in common is, they’re independent of ability: you don’t need to be smart to improve your grades. To get an A might require intelligence; to move from a D to a C usually just takes effort.

It also helps stymie the potential progress of students who may not be ‘gifted,’ and who can come to regard their ability as fixed and immutable — so why even try? Instead of this ‘fixed mindset,’ digital signage can be used to help students adopt a ‘growth mindset’ in which they feel, not ‘I am smart,’ but ‘I can learn.’ A fixed mindset prepares students to fail; a growth mindset equips them to create their own success.

It’s probably a good idea to build these in such a way that the title goes to someone different regularly, and that no single criterion takes too much precedence. An alternative would be to create multiple student-of-the-month places for successes in different areas, such as:

Consider student of the week or semester awards too.

These awards can be showcased in digital signage in public areas of the school, but there is a place for them in the classroom too. You can add them to class-specific signage like subject schedules — or even get affirming and aspirational quotes from students of the month and display those.

Consider foregrounding students who have played a prominent or important (not always the same thing) role in events such as:

The goal here is twofold, because it’s really aimed at recognizing two different groups. On one hand, you have the students who would receive recognition already: the scorer of the winning goal, the victorious mathlete. On the other hand, you have those who participated fully, but in less prestigious roles, or to a less glamorous outcome. 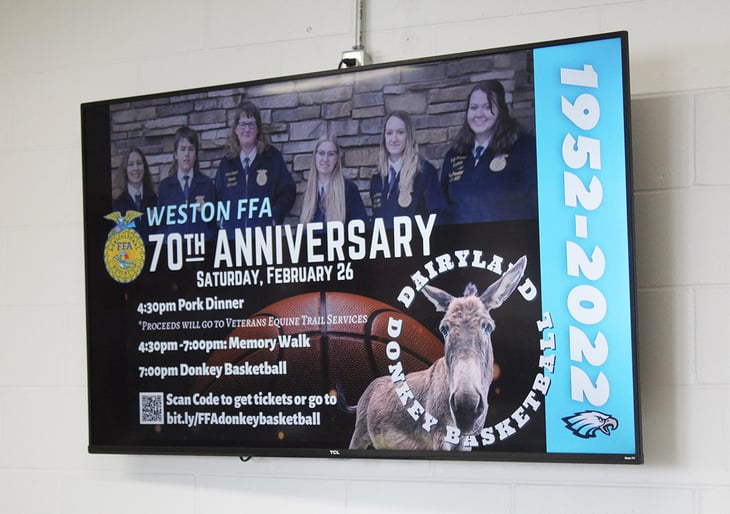 The students who are already in line for recognition can be foregrounded as a way to celebrate the event. Build in-class signage around them when you’re trying to get new students to sign up for teams and groups, or where you want to celebrate a particular attribute or skill in the classroom. Mathletes are an obvious match for math lessons, but qualities like perseverance and team spirit can be applied to many subjects.

For students who played more background roles, you can reflect the success of the event onto them, and underline that everyone involved was required. Goals aren’t scored without assists, plays aren’t successful without lighting, sound and costumes. Bring the unsung forward to take a bow, and help students to feel that every contribution — including theirs — is valuable.

Learn more about how Chief Leschi Schools use Rise Vision to inspire their students here.

The classroom can be a place that’s stressful as well as challenging, or one where negative emotional reactions can intercede and prevent students from learning or succeeding. Students’ emotional state can’t be seen solely in terms of what happens in the classroom, of course — what happens in the halls and at home matters a lot too. But classroom teachers have more direct control over the messaging in their classrooms, and every intervention counts.

In class, students might reach an idea that simply baffles them, whether that’s an interpretation of a text, an equation, or a description of a natural process. When that happens — to all of us — it triggers two responses. First, we think of what we’re supposed to do in this situation. Second, we experience a negative emotion — the opposite of the reward we feel from doing something well.

Digital signage can help teachers provide guidance for both responses, in a way that helps students get back on track and refocus. The question, ‘what should I do in this situation?’ can be answered by showcasing students who experienced the same difficulty, and did the right thing in response.

Don’t understand a text? See what it says in Cliff’s, or consider whether one of the main techniques for comprehension might help. Baffled by an equation? Remind yourself which order to do it in, and take your time. Students need to see this messaging in the moment when they need it. Digital signage can do that in classrooms, but it can go one better and give students that advice directly from their fellow students. 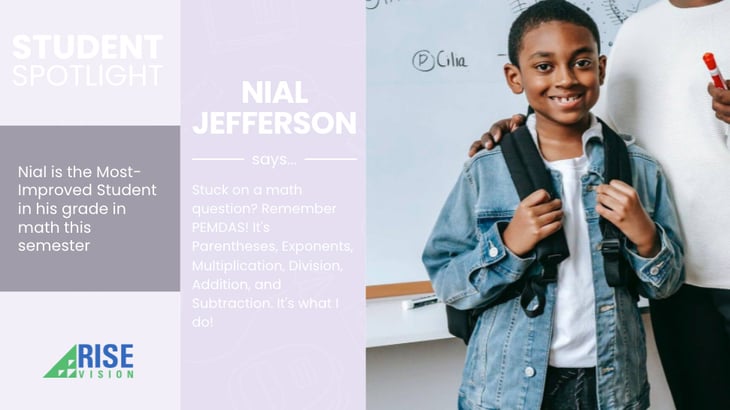 We still have to deal with the negative emotional reaction. Worried that they can’t figure out what to do next, students can become anxious. They’ll seek to alleviate those feelings of anxiety by doing something immediately rewarding. For some students that might be disruptive behavior; for others it might be daydreaming, joining the 20% of students in American schools who are quietly and unobtrusively joining the ranks of what researcher Tim McDonald calls the ‘compliant disengaged.’

This is where everything comes together: we can prime students for a growth mindset, guide them to the right solutions, and celebrate student successes all at once. How did this month’s STEM student of the month improve so much? Work with them to develop a message that other students can use, and display both that, and the award, on classroom digital signage.

Digital signage can help schools to access important benefits for the whole school, by showcasing the achievements of some students. You can build digital signage that will help improve the confidence and capabilities of the students being celebrated, but in the classroom specifically, you can do it in such a way that you aid other students when they need it most. Best of all, it’s relatively simple, and Rise Vision offers several suitable templates for schools wanting to try this in their classrooms.