To communicate the same message quickly to a lot of people in your school, nothing beats a marquee sign. And if you’re driving past, the marquee sign might be the first part of the school building you see. So it’s a unique opportunity to make a first impression. You can use them to inform, persuade, inspire and warn, among other things.

But what makes a marquee sign a marquee? How do they work? And where do they fit into your overall signage strategy?

Let’s start at the top.

Marquee signs are usually permanent or semi-permanent signs attached to buildings. Normally, they’re at or near the entrance, and they’re designed to be visible to passers-by.

Where digital signage is used inside schools it’s usually aimed at a portion of the school community, like members of a certain grade or team. Sometimes it’s aimed at visitors, but they’re visitors who have already decided to come inside. Marquee signage has a different target audience and different messaging. It’s aimed at people passing by, who don’t necessarily yet intend to come in at all; or it’s aimed at large groups who need to know basic information quickly. Either way, it’s designed to get a simple but coherent message across quickly from a distance. It’s this function which explains the design and siting of marquee signs.

While we’ve all seen plenty of analog marquee signs, including totally static ones as well as neon, movable-letter, and ‘cinema light box’ signs, what we’re really interested in here is how to use digital marquee signage for schools.

Digital marquee signs are specialized screens, toughened for constant outdoor use, displaying digital content. Because of their unique display environment, they’re big-ticket items, and this means a slower-moving, more conservative market. Most digital marquee signs are running on outmoded systems, and many use LED lights to offer a display that works like a zoomed-out cinema light box. Resolution is poor and there’s little opportunity for variety in content.

What can schools use marquee signs for?

Marquee signs can be used to notify the whole school of important information and upcoming events, or to communicate with people from outside the school altogether.

Marquee signs can also be used to remind students of upcoming events that affect the whole school, such as exams (teachers know to the minute when exams are, but students are often shocked to discover six weeks have passed and the time has arrived) or holidays and cultural celebrations.

On the other hand, marquee signs are a great way to get a simple message out quickly when there’s an emergency. Road closures and unexpected weather events like floods affect everyone and marquee signs can be used to rapidly spread the word. (Bonus points for high-quality signs that let you display QR codes so people can look up additional detail on their phones.)

Typically, marquee signs work using direct, manual communication between the signage and the software that tells it what to show. Some need a wired connection! The typical arrangement is to use software supplied by the sign manufacturer, over a local network rather than via the cloud.

Software provided by sign manufacturers is a little like furniture provided by chainsaw manufacturers: it’s not necessarily going to be awful but the initial signs aren’t good. Sign manufacturers frequently outsource software creation or white-label it (use generic software wrapped in a new ‘skin’ of branding); the results can be usable, but they’re often clunky and restrictive. They often take considerable time and effort to update, as well as making scheduling content difficult.

What they’re not is quick, intuitive, easy, fun, versatile… and it’s a shame to leave all that on the table. Worse, they seldom play nice with the software you’re using for indoor digital signs, meaning you’re duplicating effort and adding busywork — something no-one who works in a school needs any more of.

The best practices for marquee signs are essentially the same as those for internal digital signage, they just need to be adjusted to take account of the specific needs of marquee signage.

Those best practices include:

Content management for digital signage should be cloud-based. It’s more secure, more robust and more versatile. When you want to add new users, setting up and managing accounts takes a couple of clicks. You can control who has access, and it’s equally easy to add new displays — including marquee displays.

There’s no point of failure for the system so it’s more robust; a single server can’t crash and stop everything from working.

Most importantly, if it lives in the cloud you can access it from everywhere. We’ve had feedback from users saying they heard new information, ducked into a classroom and opened a laptop: a half-hour later, that updated information was on screens schoolwide.

Options are limited when it comes to creating content for marquee signs. Poor screen definitions play a part. But clunky software that locks you in to a few ‘all-purpose’ templates or forces you to reinvent the wheel every time? That doesn’t help either. 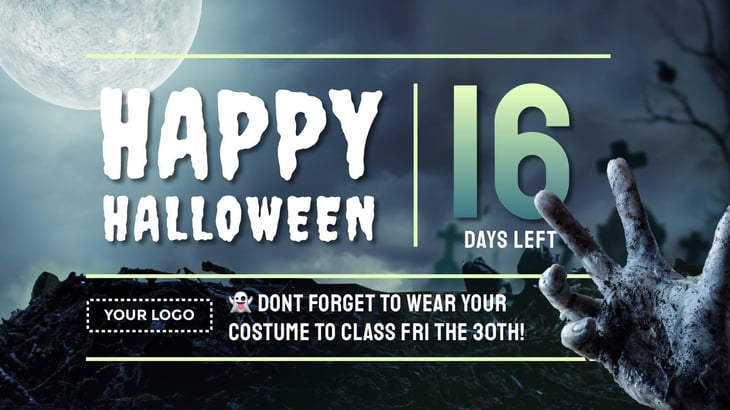 Get started with this Halloween digital signage template here.

Content creation tools should let you choose between templates that fit your exact situation as closely as possible (‘Halloween,’ not ‘Holiday’) and give you plenty of room to move, adapt, and brand and has an interface that’s easy to pick up and use.

That’s true for hallway, classroom and cafeteria signage. Why shouldn’t it be true for marquee signs?

Reaching the right audience is about saying the right thing, the right way, in the right place and time. For marquee signage, messaging has to be succinct. Think headlines, think slogans, or think what you’d yell about your school if you only had one lungful of air to do it with.

When you’re planning marquee signage, your target audience is often ‘tuned out.’ They’re already busy doing something else, and you need to grab their attention, reward it, and inspire action in just a few well-chosen words. Those words also need to be legible, so you’re looking at simple layouts and clear typefaces.

It’s worth considering changing the messaging on marquee signs depending on the time of day. A lot more commuters will see a sign at 8:30 AM than will see the same sign at 10:30 AM. If you want to reach out to parents of potential pupils, school run time is your slot; after that you can change to more generalized messaging.

Or at least, you can if your signage solution allows for rapid changes in content that can be scheduled in advance.

The next steps for marquee signage

If you already have a functioning marquee sign system, it might be adequate to your needs as they stand now. But many schools are seeking to move into a more digitized future where communication with the school and the community is done using modern web technologies. There are reasons for that, chiefly that it’s much easier to schedule, scale, change and design signage that way. It’s also easier to knit your marquee signage into your overall digital signage strategy if you can control it using the same software that manages your other signs.

The gold standard is marquee signage as a part of an integrated signage system that gives you schoolwide communication you can schedule, adapt, and manage from anywhere.

Marquee signage can be a uniquely powerful and effective way to communicate with large numbers of people quickly. Whether it’s encouraging walk-ins and visits from parents who’d never have considered it otherwise, or making sure everyone on campus knows about the hurricane warning, marquee signage is a vital piece of your school’s digital signage jigsaw puzzle. Schools should look to approach this through a lens of integrating the control systems for their signage as much as possible, to increase the coherence of their messaging and to improve efficiency.